How to Protect Your Child with a Standby Guardian 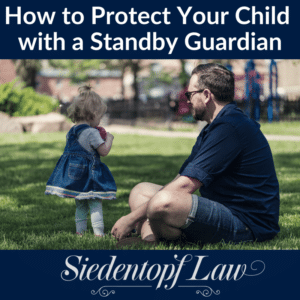 Summary: In Georgia, a Standby Guardian takes custody of a child in the case of some unforeseen circumstance (mental incapacity, physical debilitation, etc). Siedentopf Law discusses how to select a standby guardian, when that guardian’s authority is activated, and other related issues.

Many people are familiar with the estate planning term “guardianship,” which is where a parent designates a person to care for his or her child in case of death or permanent disability.  However, Georgia law does provide a second guardianship option – which is known as a standby guardianship.  A standby guardian legally takes custody of a child in the case of some unforeseen circumstance or triggering event.  The parent does not relinquish his or her parental rights altogether; they are merely transferring custody because they are unable to care for their child.

A parent (who has physical custody of their child) can designate a standby guardian by putting his or her wishes in writing; that document also needs to be signed by two witnesses.  Neither of the witnesses can be the standby guardian.

The state of Georgia requires that both parents consent to the designation of a standby guardian. However, the court does not need both parents’ consent if the noncustodial parent’s parental rights have been terminated or if the noncustodial parent cannot be located.  It is also important to note that standby guardianship does not relieve a parent of their duty to support their child.

Depending on their mental or physical health, a parent can continue to communicate with a standby guardian after the guardian has assumed the responsibility of the child.  They can discuss the child’s care and welfare.

Why a Standby Guardianship

For more information on standby guardianships, or if you are interested in establishing a standby guardian for your child, visit the Siedentopf Law’s website at EstateLawAtlanta.com or call us today at (404) 736-6066.

© Sarah Siedentopf and Siedentopf Law, 2018. Unauthorized use and/or duplication of this material without express and written permission from this site’s author and/or owner is strictly prohibited. Excerpts and links may be used, provided that full and clear credit is given to Siedentopf Law and EstateLawAtlanta.com with appropriate and specific direction to the original content.

What Are Your Estate Planning Questions?

Atlanta estate planning items like health directives, wills, trusts and more can be overwhelming and confusing. Let us know your questions by submitting them through the form below, and we'll be in touch.