Video: What is the difference between Per Capita and Per Stirpes inheritance? 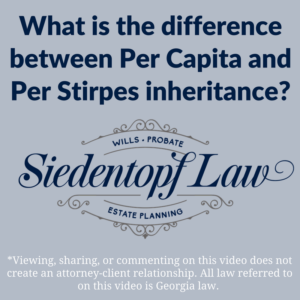 Estate Planning and Probate Attorney Sarah Siedentopf explains the difference between Per Capita and Per Stirpes inheritance, and how it affects the distribution of assets.

The question I want to answer today is, what does per capita mean and how is it different than per stirpes? They’re both Latin phrases and they’re both legalese. Where do we go from there?

Per capita roughly translated is “by head” and per stirpes is “by branch.” So, we would initially assume that per capita is what we want, because we want everyone to inherit. Generally speaking, this is not true. This is how per capita works: if you have three children, and two of them are alive when you pass away and one of them has predeceased you, per capita means that the two living children will inherit from you. You have to be alive to inherit under per capita terms. If you had left your assets per stirpes to your children, the two children who are alive would inherit from you, and any grandchildren from the third child who predeceased you would also inherit — and they would split that child’s share of your assets. So while per capita seems to make sense just from the way the words sound, most of the time what you’re actually looking for is per stirpes in your will. If you have any other questions about this, feel free to contact me. Thank you.

What Are Your Estate Planning Questions?

Atlanta estate planning items like health directives, wills, trusts and more can be overwhelming and confusing. Let us know your questions by submitting them through the form below, and we'll be in touch.